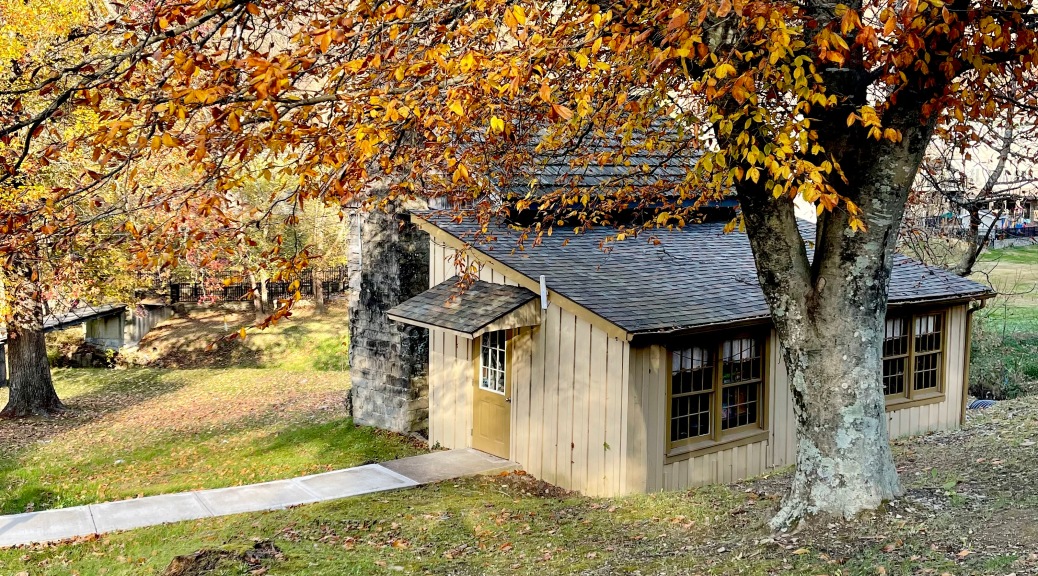 I spent the weekend in the woods, or almost in the woods, and perhaps more accurately on the edge of the woods that cover the hill which seemed like a mountain that rose behind the cottage where I stayed at Hindman Settlement School.

I know of those who spent the weekend lallygagging poolside in Florida,  but I had on my calendar a writing retreat at the settlement school, one I signed up for in the sweltering heat of July. I signed up because I was hot and November seemed refreshing. I signed up because several of my friends had signed up, too.  It was a bit like junior high.

Our pal, Silas, was facilitating the workshop, and he sent a text telling us the spaces would go quick and we eagerly enrolled, like adolescents going on a field trip.  It was better than any field trip, with all those writers, and with the author, Ashley Blooms there, too, running her own sessions.  I came home with some new people to call friends, and I suspect, so did most of us.

I liked my new pals immediately.  For one thing, writers, at least my favorite ones,  are just funny,  They tell the best stories.  So, we sat around the first night laughing our heads off, as we rearranged the furniture a piece at a time to accommodate newcomers to the circle. I suspect, we also gathered in a bit because our hearts were slowly warming to each other.

The thing I like best about a good story told by a writer is the clever turns of phrase they use…so we laugh, but we also repeat the phrase quietly to ourselves, catch the eye of someone doing the same thing, and we laugh all over again.  It’s like chili or soup that is better the next day.

We had to show vaccination cards upon arrival and we socially distanced during craft workshops, each of us with a big table to ourselves.  But the rest of the weekend was … just normal.  Taking our mugs to Marianne’s room for her good coffee each morning.  Lunch and supper in the great hall, where Vivian fed us well and with the best and kindest of humor, retrieving her polenta recipe so I could take a picture of it.

Until Hindman, I have been dismissive of polenta, remembering only my grandmother’s cornmeal mush, which she served when she’d get on a kick.  Out came Vivian with an Ina Garden recipe and her own notations written in the margins, and I was the hero of our table, because we had all rhapsodized about that polenta throughout the meal.

One group, hardy souls that they are, walked the steep hill behind the school.  I am told the view from the ridge is wonderful.  And I am sure it was Saturday afternoon, too.  The late November light was slanting golden and warm, the trees almost bare after laying down a carpet of russet and ruby leaves for the hikers.  The pictures they posted were stunning.  All of them smiling, backlit and shiny, leaning in toward each other like comfortable old lawn chairs.

I couldn’t make that hike the first time I tried it, the trail shoots straight up in a lung-busting trajectory. I wasn’t tempted even a little bit to join them Saturday afternoon.  But I waited for them to return, all rosy-cheeked and bringing the crisp fall air in with them, the woods trapped in their jackets and wool caps. We toasted them as they toasted each other, and it was perfect, as perfect as a moment can be.  Simple, warm, loving.

We created a little community as best we could in this time of almost past Covid.  I noticed the way we instinctively spaced ourselves in the dinner line and when chatting around tables after meals were over, or before sessions began.  That three foot spacing for public life. But then we went home to our little cottage in the woods, and friends from other cottages stopped by. And there were hugs, and heads bent together for gossip, and a glimpse of normal, and it felt good.