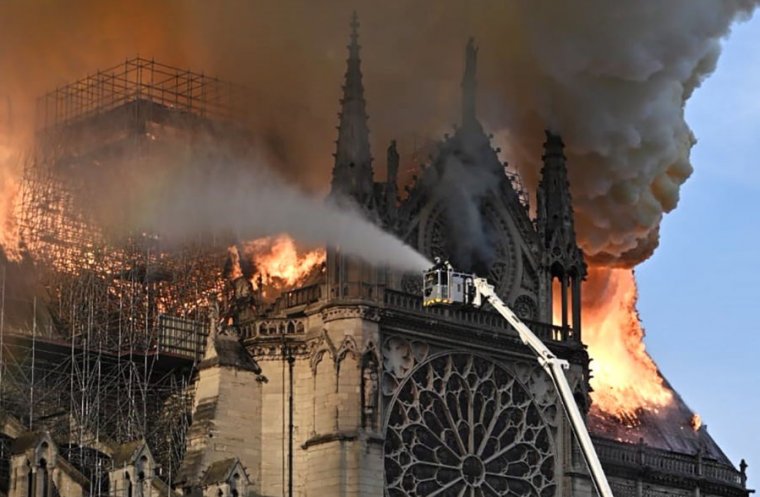 I was messing around in the yard and didn’t know a thing until a friend texted our group she was watching Notre Dame burn. I rushed in, flipped between news channels and watched in disbelief and something akin to grief as the Paris sky, not yet the evening sky, glowed orange with the impossible flames.

The spire fell as we fired off texts, this virtual moral support we use in times of distress, the modern day equivalent of gathering on porches to share news and commiserate. We each checked our preferred news agencies and sources, texted updates as we watched almost nine hundred years of history and tradition go up in smoke. Beth, who lives in France, told us the news from there, what she was hearing, the insider speculation.

During lulls we sat in our separate places, holding our phones like each other’s hands, texting out words our grandmothers might have uttered with neighbors as they sat in some long distant living room, adjusting to shocking and horrible events.

Then Beth would give us new information on the city’s planning for just such a disaster, and how this fire was too big, too high, and caught too quickly to get water above the flames, so they were regrouping in an effort to save part of the lower structure. We shared our stories of Notre-Dame de Paris.

It seemed we all had one, even if we hadn’t visited. Some had photos of themselves outside the cathedral, or inside lighting candles, silhouettes of parishioners backlit by the stained glass. Others had stories of only seeing the outside, saving a proper tour for a later visit, too late now. I grieved the prospect of losing the rose windows.

One friend went looking for her copy of “The Hunchback of Notre Dame.” One friend sent Willa Cather’s poem, “Paris,” with the lines,

The towers of Notre Dame cut clean and gray

The evening sky, and pale from left to right.

Another sent us words from T.S. Eliot’s “Little Gidding,”

Even as the spire fell, as the two towers’ fate seemed precarious, we moved on to how it might play politically in the days ahead, how the blaming would begin, such is the news cycle and the world we live in.

I have memories of Notre Dame, too. I was there in the early 80s, when cars and buses and scooters and motorcycles could still pass by the little square in front of the cathedral. The towers loomed over the Point zéro routes de France, a marker that is said to be the exact center of Paris, and the spot from which all distances in France are measured.

I couldn’t find any photos. In those days, Kodachrome slide film was all of it, and now my memories sit fading away in boxes, somewhere in the basement. But I remember lighting a candle, though for whom or what I no longer remember. I was new to the whole candle lighting thing, and my prayers on that trip ran along the lines of “thank you, thank you, for letting me be here, letting me see this.”

As crowded as it surely must have been, my recollection of moving through the space was one of solitude, as if I had passed into a moment of grace, all time suspended. It may not be the most magnificent of structures, the esthetes can debate that, but it means something to us, and it is that which we come to see and experience.

I climbed up to see the gargoyles and looked out over Paris, the Eiffel Tower off in the distance. I posed for a picture as f I were feeding them grapes, a silly touristy thing to do, like holding up the Leaning Tower of Pisa with one finger.

But oh, those rose windows. The soaring vaulted ceiling. Art as I had never seen, the relics of saints. And me, there, so small, with the world, and the ghosts so large around me.

As the fire raged, many speculated total devastation. The windows surely will break or melt or explode. If the 20 ton bells fall—supported as they are on gargantuan wooden beams— it will likely bring down both towers and the collapse will be complete.

It would be several hours before news would come the windows survived. The towers stand. The pieta, reliquary, the cross survive, enough structure to salvage and restore. Millions, a billion euros pledged. For a moment, though, on a Monday afternoon, a reminder that nothing lasts, exactly as it is, forever. A fact we can face, if we are brave, and together.