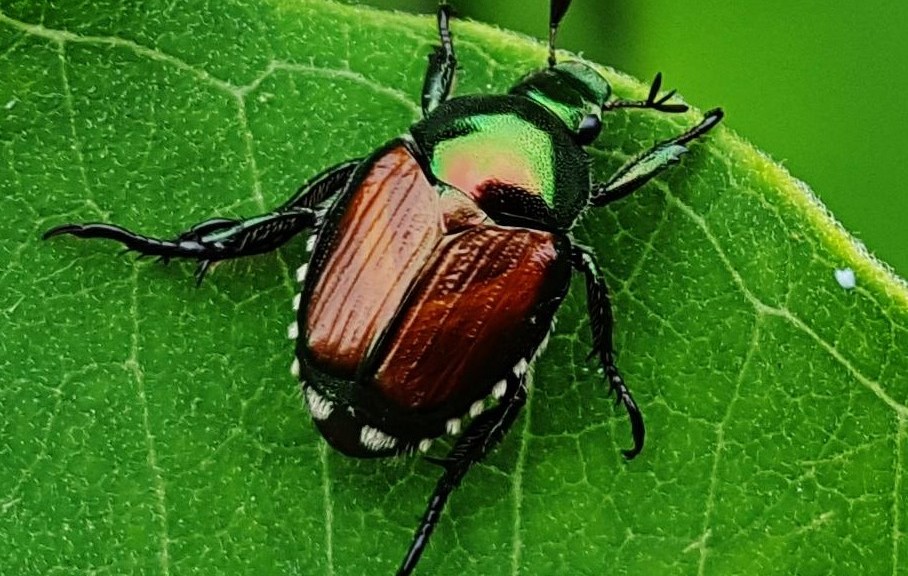 My good summer help is off the clock for a week or so.  She has church camp in Michigan and then some family time in Chicago, and my yard is beginning to miss her.  We set aside a few chores for her return, but now I think I may have to get after them myself.  My casual, happy little landscape theme is beginning to look like neglect, the kind your neighbors can call city hall about.

Even so, when she returns there will be plenty for her to do. Because now is the time when, in all my summers,  I am bored with everything:  potted plants, the pepper plants, even most the herbs, save rosemary and basil.

We were spared the cicadas, here,  and I will cop to being disappointed about that a little, but we are infested with Japanese beetles.  They have eaten the leaves on my young crepe myrtle, my calla lily—the leaves and flowers—and are making their way toward the basil.

This I will not stand.

Early this morning I inspected the crepe myrtle, the one I nurture all year because it replaces one I lost to an ice storm and is therefore precious to me.  I wish you could have seen it.  The sun barely up and it was an Amsterdam youth hostel up there on the leaves. Beetles everywhere, some cozied up to each other, you know, and something inside me snapped.

I try to be gentle with, or at least tolerant of, the living creatures in my yard, but not this day.  I plucked off as many as I could before the activity alerted their little buddies and they took flight.  Then I gave the ones I caught a little spa treatment in a bowl of soapy water, and what happened next, well, it is between them, me, and my God.

Sitting here, telling you this, has me thinking about the balance of things, and I just looked up what kinds of critters rely on the Japanese beetle to survive.  It seems birds like them, in particular robins and cardinals, both regular visitors at my house.  I see them everyday.  Either they are lazy, there are just too many beetles to get at, or their palates are more refined than usual, because, again, beetles everywhere and procreating in my myrtle.

Raccoons, skunks and moles like them, too, but these come with their own sets of troubles and I would not like to invite them into my habitat.  According to one source, Japanese beetles bring almost nothing to the party, except destruction.  We all know that guest.  And to make matters worse, the beetles weren’t even around here until 1916, when they were accidentally introduced in the New Jersey area.

There are some plants that will deter them, mint being one, but I am not kidding, they have gotten into my grandmother’s mint, as well. But no, on closer inspection just now, I see the leaves of a weed nestled in with the mint is nothing but skeleton, the mint itself, unscathed. And lavender repels them.  Which is good news, because I have some of that I need to relocate.

When Sterling returns from her travels, she and I will bolster the defenses against the Japanese beetles.  Strength and victory through deterrent.  Move that lavender into strategic positions, ditto little pots of Grandmother’s mint.  I much prefer this to early morning raids with bowls of soapy water.  But still.  I have Dawn.  And I am not afraid to use it.